The Banshees of Inisherin: Dull pain

It is April 1923 on Inisherin, a small island off the west coast of Ireland. The Irish Free State had achieved independence from its colonial ruler the United Kingdom the year before. Despite the subsequent civil war nearing its bitter end, explosions can still been seen on the mainland. However, there seems little interest amongst the locals in broader society or its conflicts.
Local farmer Pádraic (Colin Farrell) discovers that his best friend Colm (Brendan Gleeson) no longer likes him and is prepared to take extreme measures to break their bond.
Writer/director Martin McDonagh teamed up with Farrell and Gleeson fourteen years after their In Bruges 2008 triumph, though he had worked wih them individually since. He wrote this latest script for them. Knowing that Brendan is a fiddle player certainly helped.
Martin has a background in live theatre, as a playwright. His time at the Druid Theatre Company in Galway included The Cripple of Inishmaan (1996), set on the real Aran island of that name. Perhaps this helps to explain the film's similarities to a stage play. There is a limited number of indoor settings and the screenplay is heavily dependent on dialogue. I couldn't help thinking of Synge's Playboy of the Western World. Though a Londoner, McDonagh has Irish parents and is a dual British/Irish citizen, with several Irish stories in his plays and films.
Kerry Condon's role as Pádraic's sister Siobhán is a standout performance and Barry Keoghan as lonely, troubled young Dominic flies far above the pitfalls of portraying the stereoptypical 'village idiot'.
Much of the filming of the fictional island took place on Inis Mór, one of the Aran Islands. Its natural limestone pavements, stone fences and spectacular cliffs are a cinemtographer's dream.
The Banshees of Inisherin is a dark story but it contains powerful currents of Irish black humour. An exchange late in the story underlines the context of both this very personal story and the state of Ireland:

Colm: He's dull.
Siobhán: But he's always been dull. What's changed?
Colm: I've changed. I just don't have a place for dullness in me life anymore.
Siobhán: But you live on an island off the coast of Ireland, What the hell are you hoping for, like?
Colm: For a bit of peace, Siobhan. That's all. For a bit of peace in me heart like. You can understand that.

Judging by the memorabilia in his home, folk musician/composer Colm had travelled extensively overseas in his younger days. While Siobhán yearns to escape to the wider world.
It may be the roaring twenties in some of the so-called western world, but Ireland is still in the nineteenth century in many resepcts. The island is a place of horse-drawn carts, hurricane lamps and candles. Its priest's confessional and policeman's brutal power have a long way to run yet in the new nation. Perhaps there are no banshees (female spirits who warn of imminent death) left but the local ghoul echoes timeless superstitions.
Anyway, it's well worth the trip back a hundred years.
Posted by Kevin Rennie at 4:52 PM No comments:

Drive My Car: Not your average road movie

The writer-director Ryusuke Hamaguchi has finely crafted this monumental take on the journey towards self-understanding, exploring love, loss, grief and guilt along the way. It is based on Haruki Murakami short stories, a surprise given its 2 hour 59 minutes duration.
Film critic Douglas Laman has explored how Hamguchi and co-writer Takamasa Oe have interwoven two famous plays, Samuel Beckett’s Waiting for Godot and Anton Chekkov’s Uncle Vanya, into the characters’ inner lives:

'In leaning on a work of the past like Uncle Vanya, Drive My Car excels on countless levels, including in finding a way to capture the interior voices of characters who refuse to overtly communicate.'

Hidetoshi Nishijima, as stage actor and director Yūsuke Kafuku, gives a first-class performance which is complemented by an outstanding cast. It is a truly international gathering, especially the ensemble required for the multi-lingual Uncle Vanya production. In addition to Japanese, the actors use Korean, Korean sign-language, Mandarin and English. 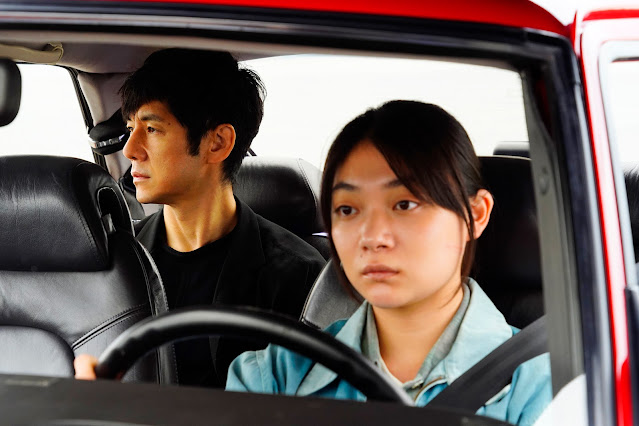 The car, a red 1987 Saab 900 Turbo, is a character itself. When Kafuku directs a production of Uncle Vanya in Hiroshima, his assigned driver, Misaki Watari (Tôko Miura), is an unlikely confessor as they share their personal nightmares and confront the past.
Perhaps the most graphic scene is when she takes him to the garbage plant where she worked as a truck driver.
Don’t be scared away by the three hours length or the deep exploration of emotions and identity. The vehicle of acting to tell the story should sweep you along as smoothly as Misaki’s driving.
Posted by Kevin Rennie at 5:55 PM No comments:

Adam: A window to the inner world of women

Adam is, as the cliché goes, based on a true story. Writer/director Maryam Touzani drew on personal experience to craft this very moving film. It is set in the narrow streets of Morocco’s Casablasnca medina, where widow Alba and her young daughter Warda reside. The arrival of homeless and very pregnant Samia changes their settled and seemingly dreary life.
We share the lives of three females of different ages and experience: mother, child and mother-to-be. The actors' backgrounds also mirror their characeters' life experience. Lubna Azabal, who plays widow Alba, has an extensive filmography. It includes numerous awards such as the 2014 Magritte for best actress in Incendies. Nisrin Erradi, as pregnant Samia, is an up-and-coming star of Moroccan cinema and has gained international recognition for her role in Adam. Douae Belkhaouda, as Warda, gives the natural performance we might expect from a first-timer who brims with confidence. Maryam Touzani found her playing in an alley.
Aziz Hattab, who plays Slimani, delivers the only significant male role as Alba's admirer with a gentle touch.
The tension between the two women is the key ingredient of the story. In often highly charged exchanges, each woman helps the other to face her personal predicaments and choices. The lack of music during the film heightens the impact of these clashes. The music that is present is usually a key part of the process of their opening up.
Cooking is the main device that brings them together. Alba supports herself by selling prepared food through a counter window. Samia is a skilled cook who helps her with recipes and preparation. The dough kneading scene encapulates its emotional importance.
Most of the action takes place in the confined space of Alba's house or the narrow streets and alleyways of the medina. Touzani has described the atmosphere as being 'akin to a theater stage, with the shop window being their one opening onto the world'.
I highly recommend that you join this inner world. It is no surpirise that this film was featured in Cannes’ Un Certain Regard and was Morocco's 2019 entry for the Acadmeny Award for Best International Feature Film.
Posted by Kevin Rennie at 5:31 PM No comments:

Can You Ever Forgive Me? - Too good to be true

Can You Ever Forgive Me? has been a sleeper of sorts down under, despite its international acclaim. Its limited release is really a shame as it's a real gem. The film is based on a true story of biographer and literary forger Lee Israel.

Lee is chalk to Jack's cheese. He is a charmer while she has had a charm by-pass. Her wit is caustic, his self-mocking. He is ostentatiously stylish to her drabness. In addition to their homosexuality, they share a great deal. They are eccentric misfits who have reached the bottom of the barrel, financially and socially. Alcohol oils their collaboration.

As always, New York City provides wonderful sets: the sleazy bars alongside the romance of quality bookshops and book dealers.

For most people in the early 90s, it's just the dawn of the digital age. Letters, handwritten or tapped out on typewriters, are still the norm. Email is still to come for most.

The targets of Israel's scam are easily fooled in this pre-information age, despite the high quality content screaming that it's too good to be true. Many see what they believe, some turn a blind-eye through greed, others are collectable devotees. It was a tribute to Lee's writing skills.

This is not Wall Street fraud and in many ways they are victimless crimes. To really enjoy this film as I did, it is best not to dwell too long on the ethical aspects of this story. Like the protagonists, the celebrity authors are long gone.

Posted by Kevin Rennie at 4:42 PM No comments:

BLACKkKLANSMAN: In black and white

Definitely enjoyed Spike Lee's BLACKkKLANSMAN. It's a bizarre scenario, supposedly a true story based on Ron Stallworth's autobiographical book. In keeping with his description of the film as a 'joint', its highs are not necessarily the anticipated ones.

Ron is the black hero of this tale of a black cop masquerading as a white man to infiltrate the Ku Klux Klan in early 1970s Colorado. John David Washington carries off this unlikely role with a winning combination of playful humour and the earnestness that the topic rightly deserves.

Adam Driver as Washington's alter-ego Flip Zimmermann, is the perfect partner. He seems to stroll through his part with ease.

You may feel just a tickle of guilt when laughing at comic elements given the deadly serious subject matter. But don't. Lee does not just tread lightly.

The message of his movie is hardly subtle. If you're still in doubt about its currency, the 2017 news footage is a stark reminder that the alt-right (including the KKK) is thriving in Trump's America. Its inclusion by Lee is a bit of an overkill, no pun intended.

It's a very strong supporting cast, especially Topher Grace as Grand Wizard David Duke and Laura Harrier as black activist Patrice Dumas. Harry Belafonte's cameo is as skilful as it is disturbing.

Lee made this on film rather than digitally, perhaps to capture some of the texture of the times. The flares, afro hairstyles and clashing colours may seem exaggerated but rang true for this babyboomer.

BLACKkKLANSMAN's 135 minutes are just a little more than necessary but don't be put off. One well worth considering as they say in the racing game.

Posted by Kevin Rennie at 10:59 AM No comments: